In April I finished one of my longest running projects- Veera Välimäki's Color Affection, which I started while travelling to Ukraine back in July 2012. It's made from Artesano 100% Alpaca 4Ply, which despite being billed as a 4-ply knitted up to the gauge of the laceweight version, contributing to the lengthy project time.

I'm not going to lie, I basically hated knitting this project. The rows seemed impossibly long by the time I had got about halfway through the two colour section. I don't know how people on Ravelry managed to finish it in a few weeks, but maybe not always having 4 projects on the go at once would have helped.

When I finally cast off, I was so disappointed by the end result- the shawl was long but thin, and seriously scrunched up along the selvedge. After all the time the project had taken I was gutted!

When will I learn to have faith in the  magic of blocking? After being pinned out the shawl is much longer, and the selvedge has went from a scrunched mess to a gentle curve. So after the trial of knitting it I'm really pleased with the outcome.

Actually wearing it is a bit of a problem though! I'm not one of those cool people who can pull off a shawl, so only feel comfortable wearing it scrunched around my neck like a scarf. This does look good, but it doesn't show off the cool structure and I can't help but think that it would have been quicker to just knit a scarf in the first place!

A note on the yarn. The artesano was fairly average to knit with. A bit rough to knit with, shed a moderate amount, and is slightly scratchy to wear around the neck. The colours are great though. Overall not a bad yarn, but I won't be in a rush to use it again. I think maybe I'm just not a big fan of alpaca. (Gasp! Controversial knitter opinion!)

So, overall colour affection was a b*tch to knit but a lovely finished object. In terms of time scale and size it's quite a big achievement for me. Now I just need to start wearing it...
Posted by Kirsty at 10:17 am 1 comment:

Email ThisBlogThis!Share to TwitterShare to FacebookShare to Pinterest
Labels: Knitting

Finally a cowl for me! 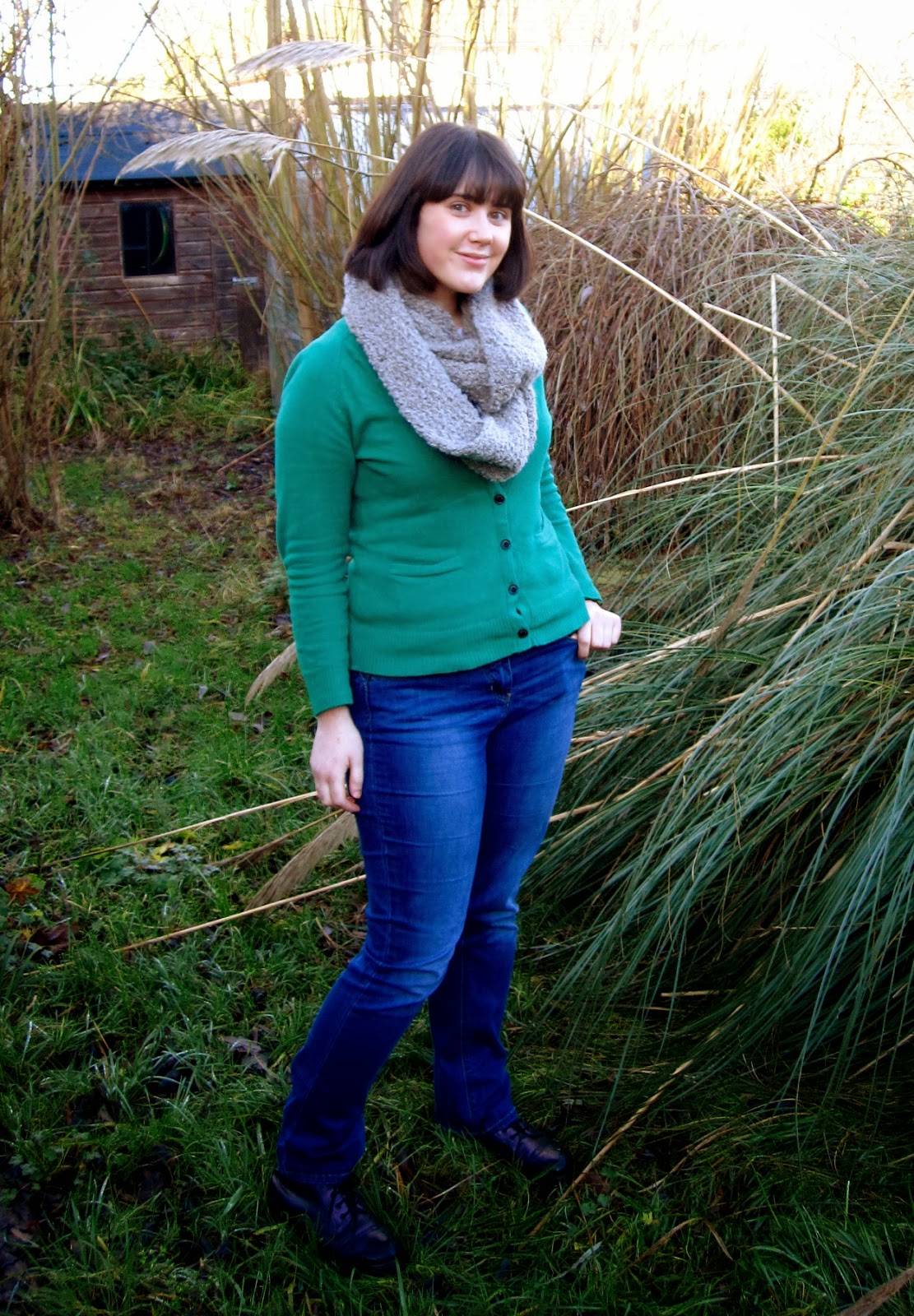 I've made a fair few cowls in my knitting life, but the ones I've really liked have been made as gifts. This is probably because I tend to knit exciting, challenging designs for myself, but at the end of the day all I want in a cowl is some moss stitch squishiness.

So now I have a cowl in moss stitch. And oh yes, it's squishy! 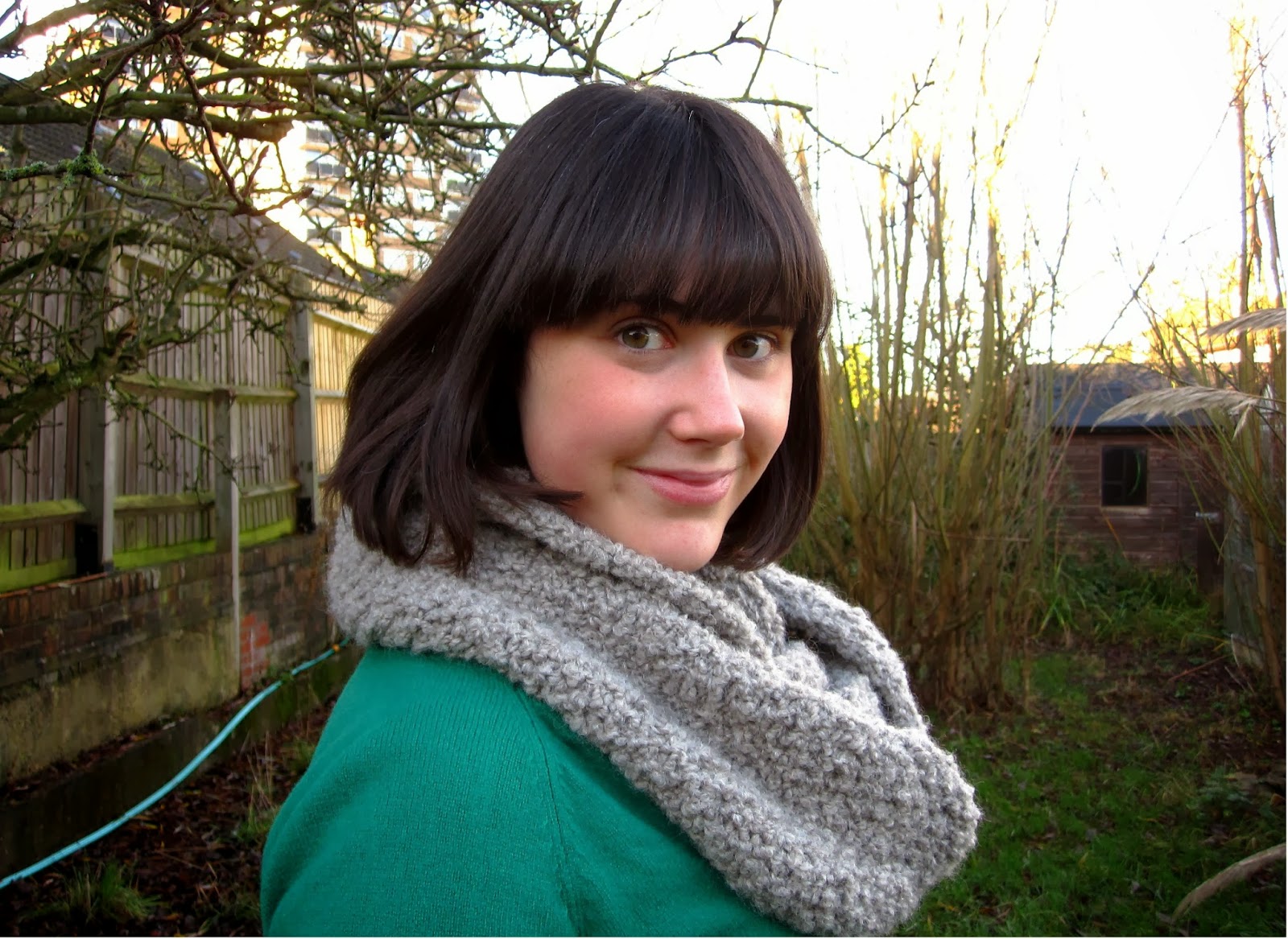 The yarn is Rowan Purelife Boucle, a gift from my lovely Grandma who takes me to run wild in the John Lewis sale every Christmas break. I found this a really interesting yarn- perhaps mistakenly I've always associated boucle with the novelty end of the fibre spectrum, but this is quality stuff! It's soft but pleasingly rustic in texture, a lovely undyed colour, and smells like sheep. Sheep smell good! The different colours come from different sheep breeds, with my light brown being Masham.

I'm not sure if the finished cowl is super cute or super ugly, but I do know that I love it! I'm going to be rare and cosy for the rest of the never-ending British winter. 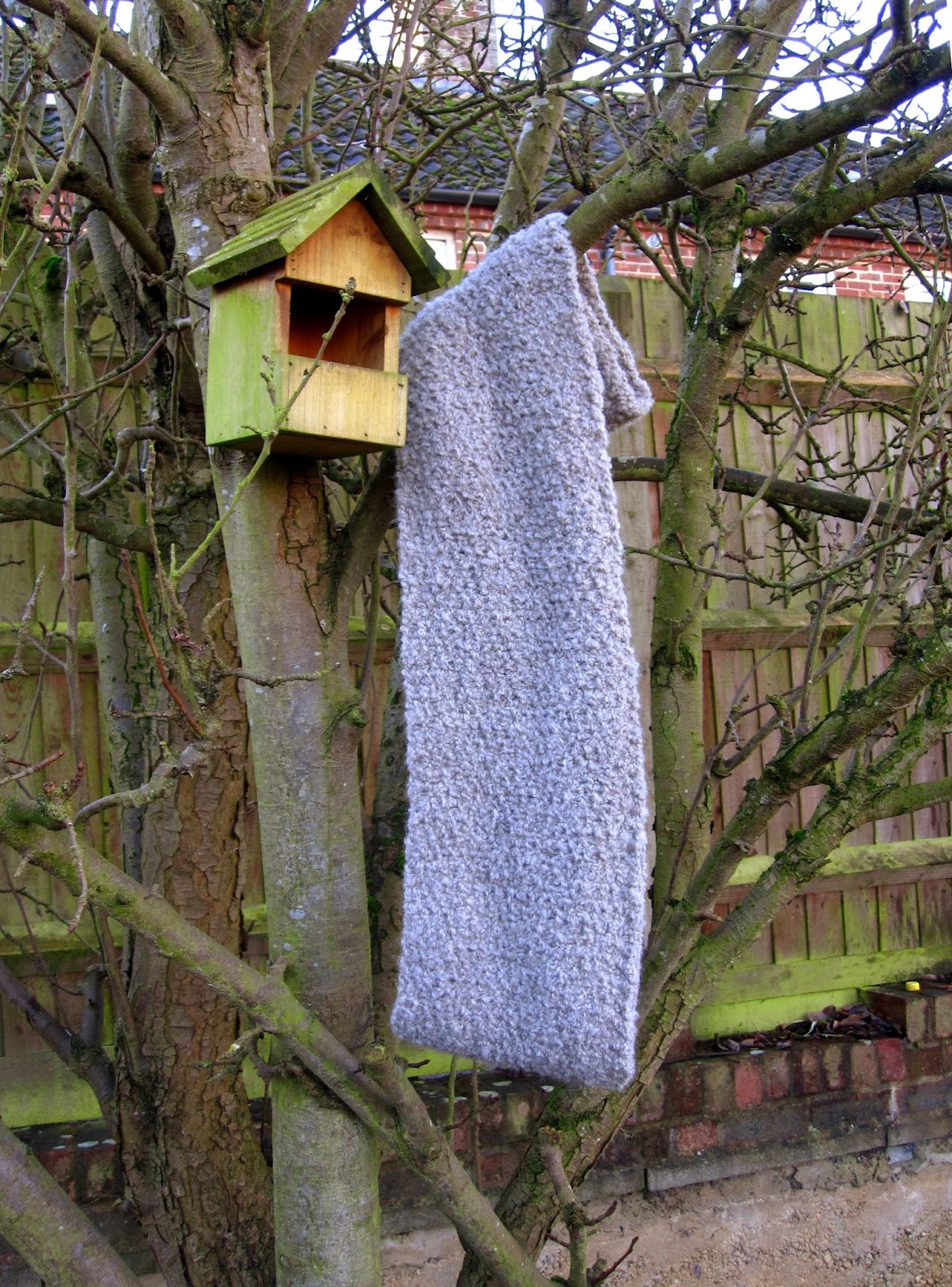 Email ThisBlogThis!Share to TwitterShare to FacebookShare to Pinterest
Labels: Knitting

Happy New Year everyone! I hope any nippy heads are recovered and you're all looking forward to the year ahead. Like many (or all) crafty bloggers I've been thinking about my year of crafting, and planning the next one!


It's safe to say that I met this goal with flying colours- 20 woolly projects completed in a year! These consisted of:


My favourite project of the year is definitely my Blank Canvas. It fits perfectly, is super soft, and have become a major wardrobe staple. 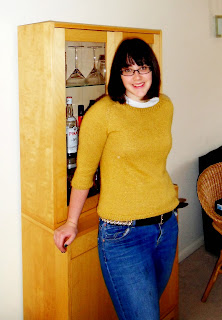 I'm also very happy with the hats I made this year, all designed by the wonderful Alexandra Tinsley.

Since learning to sew in the spring I've completed three skirts. Two of these I rarely wear, due to the rookie error of using cheap quilting cotton. The third is a red Burda 8155 and I absolutely love it! 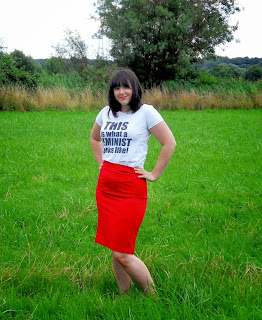 As you might guess from the sunshine and lack of jumper and tights, I finished that skirt back in the summer. Since then I just haven't been able to get back into the sewing groove, but am hoping to do so in 2014!

I'm generally not a fan of new year's resolutions, but I enjoy focusing myself with crafty goals.

What  are your plans for the coming year? (Crafty or otherwise!)
Posted by Kirsty at 10:28 pm No comments: 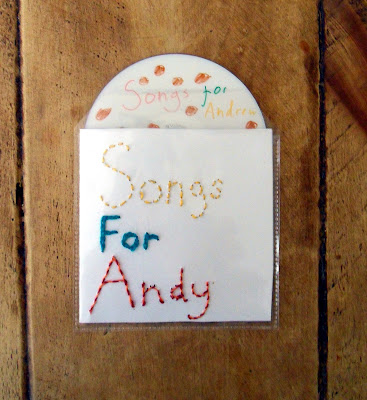 I was very enthusiatic about embroidery for roughly four days in November, before setting my 1/3 finshed sampler down in frustration and promptly forgetting about it. (Lazy daisies are not my friends.)

While knitting and sewing, the lovely wearable end product definately fires my obsession, and I just don't feel that drive with embroidery. I'm going through a slightly vagrant life-stage, so making things to decorate a house I might only live in for 6 months seems a bit pointless. I'd rather make clothes than embellish them. I still have some grand scale embroidery dreams, but I can't quite be bothered with the learning curve of smaller projects it will take to get there.

All this said, I have finally completed a (very very small) embroidery piece!

This week I was making a long owed mixtape for my favourite gentleman caller. (Well, it was a mix-CD, but that just doesn't sound as good!) I wanted to make a sweet cover for it, but unfortunately I am challenged in the artistic department and lumbered with decidely unattractive handwriting. Crafts to the rescue!

I read somewhere that good embroidery is as neat on the inside as on the outside...

Posted by Kirsty at 9:15 pm No comments:

I'm not a terribly good blogger, it would seem. But what's 7 months between friends? Having been inspired by finding more and more amazing craft blogs (and aided by gaining a keyboard which can type the letters z, x, c, n and m) I'm back! Maybe for good this time...

So, some significant crafty event that have occured since November...


My Greatest Knitting Achievement Ever!

In early December I finally finished my Perfect Christmas Jumper- 14 months in the making and one Christmas late. It came out fitting perfectly, I love it more than anything else I've ever made! It recieved plenty wear over the course of the festive season (including the day itself, obviously), and is now wrapped up in three layers of plastic to save it from any nasty beasties, awaiting next year's celebrations.

I was lucky enough to see Susan Crawford speak at Oxford's Darn it and Stitch. Her work translating vintage patterns for the modern knitter, as well as her own designs, are really inspiring and one of the first things that made me want to really get in to the craft. Sadly, having ate a rogue, lukewarm pasty for lunch meant I spent most of the teaching portion of her seminar concentrating on the spinning floor rather than her lesson on how to knit with vintage patterns. But I did get to see (and stroke!) some of the samples for A Stitch in Time Vol 2. I've read through that book so many times it felt like meeting a group of celebrities!

On to the current year, and I have set a personal challenge to complete 13 knitting projects in 2013. This include projects that were started the previous year as I can't give myself any more reasons not to finish my damn Colour Affection shawl. (Those short rows are so... long!)

Six months in, I've completed five projects... So it could be going better. But I have two projects which should be finished before too long. And if the worst comes to the worst I can bang out a few Christmas decorations in December!


I Learnt to Sew!

Over Easter my wonderful Aunt gave me a sewing machine and taught me to make a patchwork pillow case.


Last month a very patient friend helped me to make a circle skirt. Even with my low skill level it was finished in a few hours. For a girl whose only prior crafts were knitting and crochet this is the stuff of fantasy! I'm hooked!

I'm currently working on a green Miette skirt, a super sweet pattern accompanied by a step by step online tutorial. I already have lots of other projects planned (clearly I won't let something as boring as my inability to sew in in straight line get in the way of my obvious genius) and am particularly keen to try some of the wonderful patterns by Colette.

And that's all, for now. Hopefully I'll be back before too long this time!

Hello, my name's Kirsty and I like science and crafts. This blog is about the crafts, but my love of science and a certain dead naturalist will probably pop up at some point.

I am a keen (obsessive) knitter, but am keen to widen my crafty horizons. My intended first step down this path has been to learn embroidery. It seems to offer something much closer to instant gratification than knitting, where I'm lucky to gain a few inches from an evening's work. I also have a dream project for a lovely relative which will require some rad stitching skills to accomplish.

Despite these ambitions, I've never got down to it and learnt to embroider. Part of this is because when I tried to find a book to learn from I'm mostly saw books on how to make very complex floral patterns that I would never have the patience to complete, and probably wouldn't want to make in the first place. So last weekend I was very excited to come across 'Stitched Gifts' by Jessica Marquez.

This book is amazing! It has all sorts of simple but effective and quirky projects that I feel like I should be able to make up myself, but can't. Maybe after making a couple of these for inspiration I will be able to. It's great for a beginner such as myself, as it provides a comprehensive list of materials you might need for projects and a clear, illustrated stitch dictionary.

There's a lot of exciting stuff in here, and one project in particular which I want to make as a Christmas gift (possibly multiple times), but I think I'll start as Jessica suggests, with a stitch sampler.

Let's see how instant the gratification is.

Posted by Kirsty at 6:18 pm No comments: